My first ever sew-along. Wow!!! Just how excited can one person really get over a pair of maIe boxer shorts I don’t know. But excited I am...

From the start I really wanted to work on this little project at the same rate as everyone else. But life had a different road for me to take...the road of work, family and other pleasures. So this means that I am running a few days late on Day 1 of the sew-along. Not to worry, it’s not as if these boxer’s are for me!!! 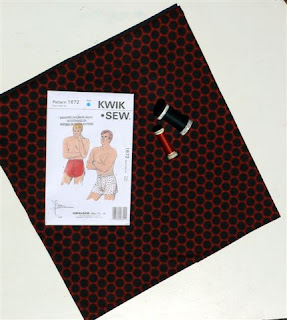 Pattern is Kwik Sew 1672. Several reviews already on PatternReview that tick this pattern as being a good one.

And the fabric is a black and tan geometric patterned cotton. A more 'male' looking fabric that I had in my stash. Originally I had picked it up to use as a lining for a jacket.

And the finished boxer's... 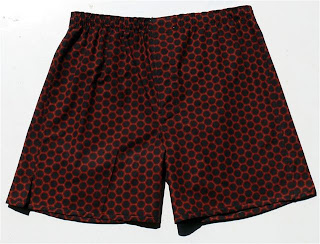 These boxer's are for my son, who had a few 'requirements' that needed to be considered. First off was that they had to be longer than RTW boxer's. Son is 196cm tall, which converts to 6'4". A very tall 15 year old. And also he didn't want the fly open, but sewn together. Two easy enough requests.

And my own 'personal' changes included flat-felling the seams for comfort, and using matching bias tape on the hem.

So for about 1 hours work from start to finish is one made to measure pair of boxer shorts. Don't think I will get a photo of these being modelled!!! Just don't think he will stand like the models on the pattern envelope... 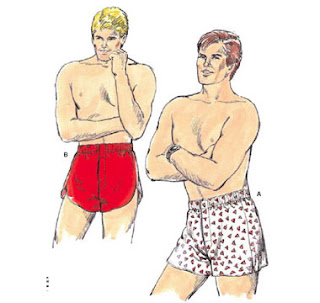 Only problem I can see with these finished boxers is that I will be sewing them for the rest of my life. No way will my son go back to wearing RTW boxers again. And hubby has jumped on the bandwagon asking for a few pairs as well. Well, at least they can nearly be made with my eyes closed, no invisible zipper, no French Seams, no darts or gathering. Just plain simple sewing at its best...
Posted by Judith at Monday, October 10, 2011