After wearing the Vogue 8709 jacket a few times I had the feeling of something 'not quite right' behind me. So after a few peeks in shop windows at my reflection it was obvious - the lower panel on the jacket was sticking out a tad! Not in an unattractive way, luckily, but in a ‘it’s not meant to do that’ way. So a modification to the rear hem was needed. Something to just weight the hem and give a more becoming drape.

So out of the old memory banks came the thought of how the ever gifted Coco Chanel invented a trick of sewing chain hems into her jackets and skirts, which in turn became a traditional feature in Chanel jackets. Chanel sewed the chains into her jackets to give them weight so they wouldn’t flop all over the place.

My jacket was in need of a similar treatment, to help it hang smoothly. So my Vogue 8709 Marcy Tilton jacket now has a little

I used a chain with a flat oval link, 6 x 4 mm, in an antique gold colouring, and attached it by hand onto the upper hem of the jacket. It is only sewn between the side seam sections..... 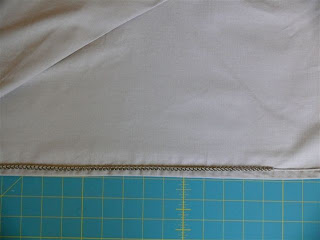 A great article spelling it all out is at sewing.org for those who would like to read a little more on the process.

So after stealing a trick from Coco Chanel, my jacket now looks absolutely fantastic when I take a peek in the reflection of shop windows.....
Posted by Judith at Saturday, September 10, 2011